CAUGHT-UP IN A WASPFISH STIING! 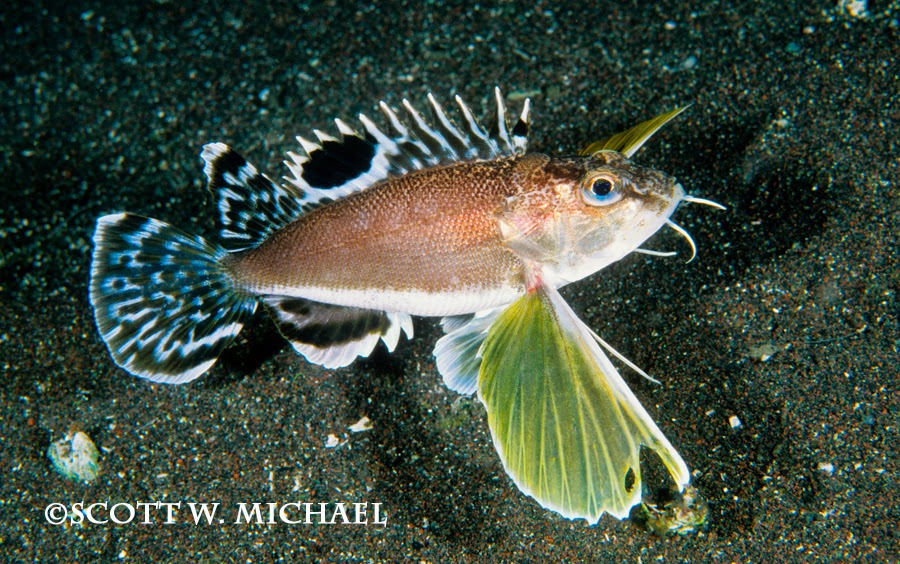 The longfin waspfish is spectacular species that is not easy to keep in the home aquarium. At night it emerges from the sand and cruises just over the bottom hunting.

There are many of aquarists that are always in search of the bizarre. There are a number of scorpionfishes that fall into this category and some of these show-up in the aquarium stores from time to time. These fishes are like fine art - they don't move around much but they are beautiful to behold as they remain in repose on the bottom of the tank or on the rock-work.

There are several species in the family Apistidae (which are closely related to scoripnfishes) and one of these species is available to aquarists on rare occasions - this is the longfin or bearded waspfish (Apistus carinatus) (Bloch & Schneider, 1801). This fish ranges from the east coast of Africa and the Red Sea east to the Indo-Malayan Region, north to Japan and south to Queensland. As mentioned above, it is closely related to the scorpionfishes - in fact, not long ago the family was thought to be a subfamily of the Scorpaenidae. While it is commonly called a waspfish, do not confuse it with those of like-name from the family Tetrarogidae.


The longfin waspfish occurs on soft bottoms as shallow as 6 m (20 ft.) to depths of at least 60 m (195 ft.). It is typically found on open silty sand and mud plains where it spends some of its time buried under the substrate - at least during the day. At night, they come out to "play" (that is, to hunt crustaceans and small fishes) and can be quite active. I have encountered a number of longfin waspfish in the cool waters of Ozesaki, Japan, but only after dark. At night, we would regularly find them cruising just over the bottom. 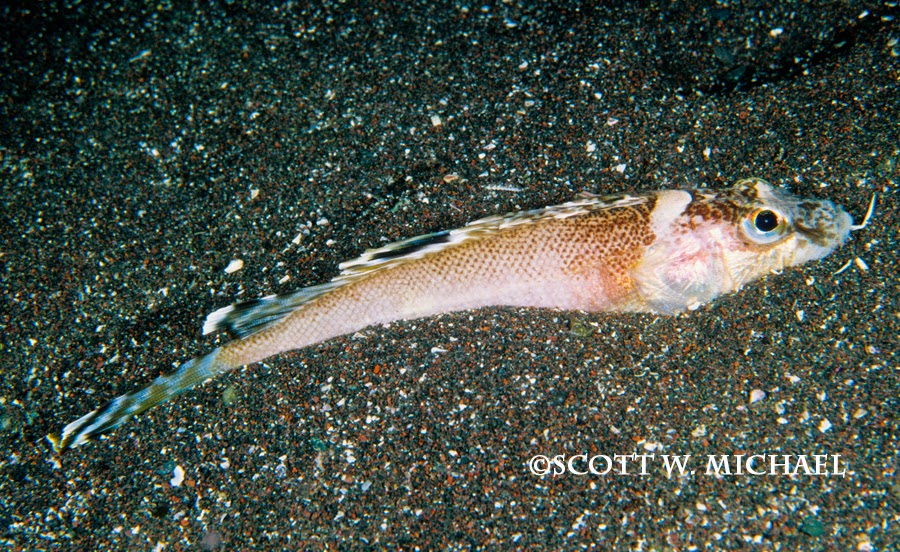 During the day, the longfin waspfish buries in the sand. Here an individual is seen partially buried.

The longfin waspfish has one big ocellus on each side of the spiny dorsal fin, that may function to deter would-be predators, and black reticulation on the median fins. The greatly elongate pectoral fins may be drug over the substrate to flush out animals hiding just under the sand or mud’s surface. They may also be employed to block the escape of small benthic fishes or crustaceans that the fish is stalking, as suggested for the lionfishes. The three barbels under the chin are probably used to locate, or to test the palatability of potential prey items. It reaches a maximum length of 18 cm (7 in.).

The first key to keeping this fish is a large tank (135 gallons or more) with an open sand or mud bottom (skip the décor). It is an active fish, at least at night, and will require plenty of swimming space, so a tank with greater surface area is more important than one that is high and narrow. The substrate should be fine and at least 5 cm (2 inches) in depth. This fish, as mentioned above, will bury in the sand or mud bed during the day (in many cases you may see the top of its head and back protruding from the substrate).

The second thing that will be essential is a source of live food. Live, gut-packed ghost/glass shrimp are probably the best food for the longfin waspfish. You can also try live mollies. One problem with the fish is its likely to do all of its eating after dark. You can use a lamp that produces a red light to watch this fish after dark. When it comes to tankmates, do not keep it with aggressive feeders that will snap-up food items before the waspfish gets a chance to hunt.  In fact, it is best kept on its own, at least until you get it feeding.

A cooler water temperature may also facilitate long-term care of this species.  Along the north Bali coast, this fish is found in an area where the water temperatures tend to be lower and it is also more common in the cooler coastal waters of Japan (in both locations it is also found living in the same habitat as the blackfin or gurnard lionfish, Parapterois heterura). Therefore, it may be best to keep this fish at water temperatures lower than 74 degrees Fahrenheit.

Be aware, like their scorpionfish relatives, the spines of the longfin waspfish are venomous.


© Scott W. Michael - article and photos should not be reproduced without the authors permission