THE LEAF SCORPIONFISH - KING OF CRYPSIS 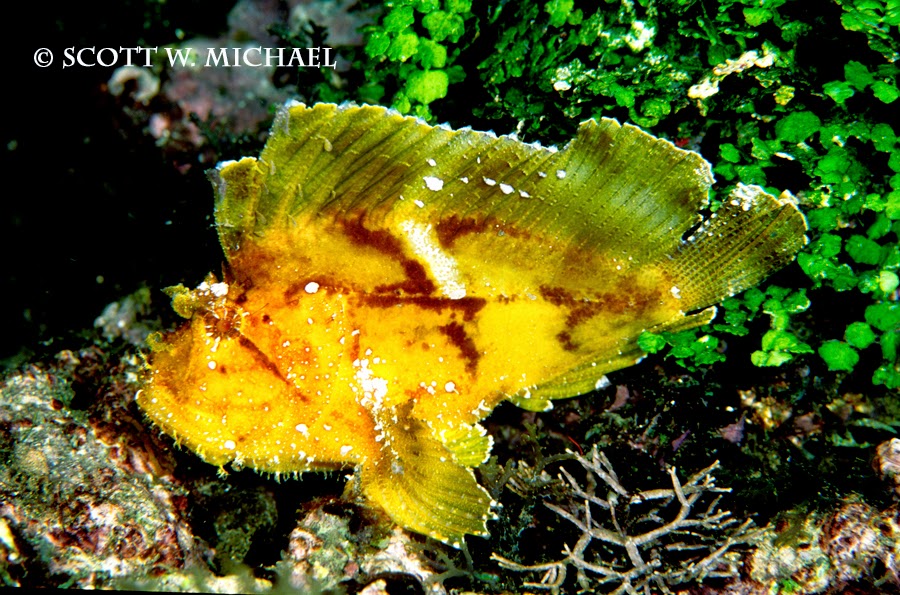 The leaf scorpionfish is very good at going unnoticed. Not only does it look like a piece of water-logged plant material (which is not uncommon on coastal coral reefs), it also sways back and forth to enhance its camouflage. They make fascinating aquarium residents, but do  remember the spines are venomous.

There are three things that are important in the life of a fish (or any other organism). One: to acquire something to eat. Two: to avoid being eaten. And three (if you succeed in getting enough nutrients and steer clear of your hungry neighbors): to reproduce. One thing that can help a fish to achieve the first two objectives is to look like something that it is not, like an algae encrusted rock or a toxic sponge. This antipredation/feeding adaptation is referred to as camouflage or crypsis. Crypsis can take one of two forms: either a fish can match its surroundings so it goes totally undetected (i.e., eucrypsis) or it can take on the appearance and actions of something inedible (i.e., masquerade). One of the best examples of eucrypsis in the coral reef community is the leaf scorpionfish (Taenianotus triacanthus). With its laterally compressed body and high dorsal fin it resembles a leaf or the frond of a macroalgae. It enhances its mimicry of plant material by rocking back and forth or by swaying from side-to-side.


Not only is the leaf scorpionfish a great example of animal adaptation, it also make a fascinating aquarium inhabitant! In this article, we will examine the biology and aquarium care of this unique scorpionfish. 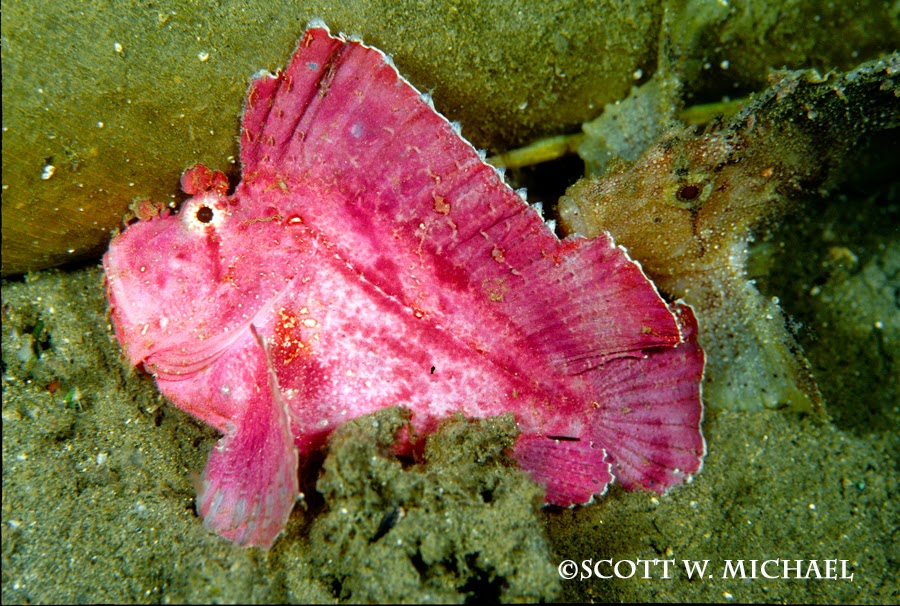 A beautiful pink leaf scorpionfish interacts with a light colored individual off  Ambon, Indonesia. The pink fish, which I would suggest is a male, flops from side-to-side in front of what may be a female individual.
Leaf Life

The leaf scorpionfish is highly variable in color. When the juveniles settle out of the plankton they are nearly transparent. As they grow, they often take on the color of their surroundings. The overall color can be black, maroon, red, pink, brown, tan, dirty yellow, bright yellow or white, with dark or light mottling. Some individuals can be multicolored. For example, I have seen a pair of bicolored specimens from the Fijian Islands that were orangish on the belly and flanks with a bright yellow back and dorsal fin. This fish can undergo radical color shifts over long periods of time. For example, a pair of dirty yellow specimens at one dive site changed to white over several months time. The coloration can also change slightly if they move from a light to darker background, or vice-versa. Microalgae sometimes grows on their skin, which can also alter their color. This plant material is sloughed off along with the cuticle (outer layer of skin) when the leaf scorpionfish “sheds.”

The leaf scorpionfish is a resident of the Indo-Pacific – more specifically, it ranges from East Africa to the Galapagos Islands, north to Ryukus Islands (Japan) and south to New South Wales, Australia. The leaf scorpionfish is most often seen on coastal fringing reefs. They will often sit at the mouth of a cave or crevice, or between columnar corals. If threatened, they will duck into an interstice or disappear among the coral branches. This fish reaches a maximum length of around 10 cm. 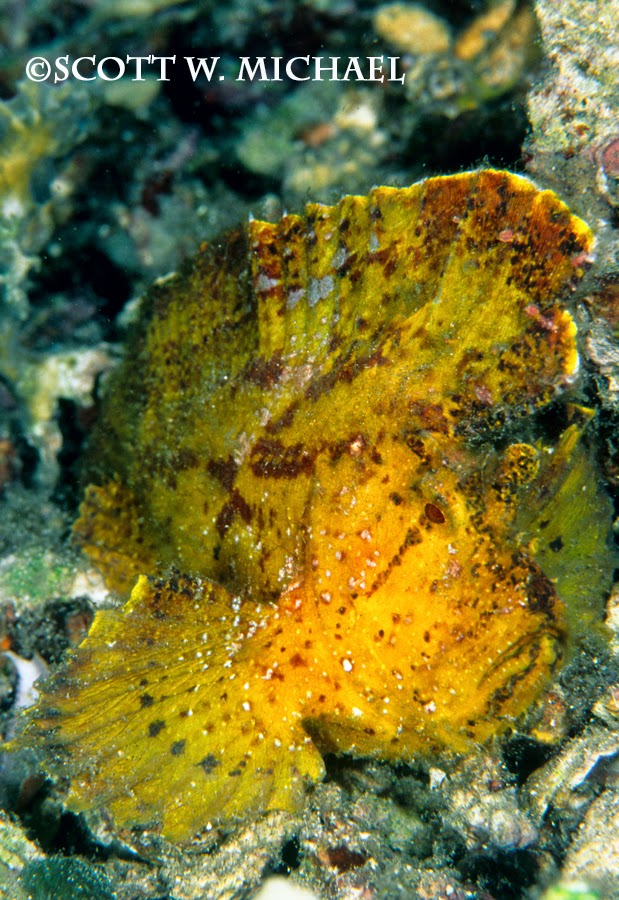 A highly desirable yellow individual on a rubble patch on a fringing reef off the island of Sulawesi, Indonesia.The leaf scorpionfish can make a fantastic addition to the smaller reef aquarium as long as you are willing to offer live food initially.

The leaf scorpionfish is a patient predator. It relies on its amazing camouflage to ambush unsuspecting prey. While food habit studies have not been carried out on this species, it is assumed that they eat small crustaceans and fishes. I have often seen them surrounded by shoals of small cardinalfishes or sweepers. I imagine that the cryptic scorpionfish occasionally inhales one of these prey fish. It can ingest its food so quickly (by rapidly increasing the volume of its gill and mouth chambers when it throws its jaws open), that members of the shoal probably don’t even recognize the leaf scorpionfish as a threat. Food consumption tends to be rather low in the scorpionfishes – say, one or two prey items per day.

This scorpionfish regularly occurs in pairs in the wild and are sometimes sold as pairs in the aquarium industry. In the many pairs I have observed on the reef I have noticed that one individual is typically larger than the other, suggesting size-related sexual dimorphism. While they are usually found singly or in pairs, occasionally the leaf scorpionfish can be found in aggregations numbering up to eight individuals. I have seen males competing for a single female just prior to sunset. In one case, a male kept chasing competitors away as they tried to move in on his mate. 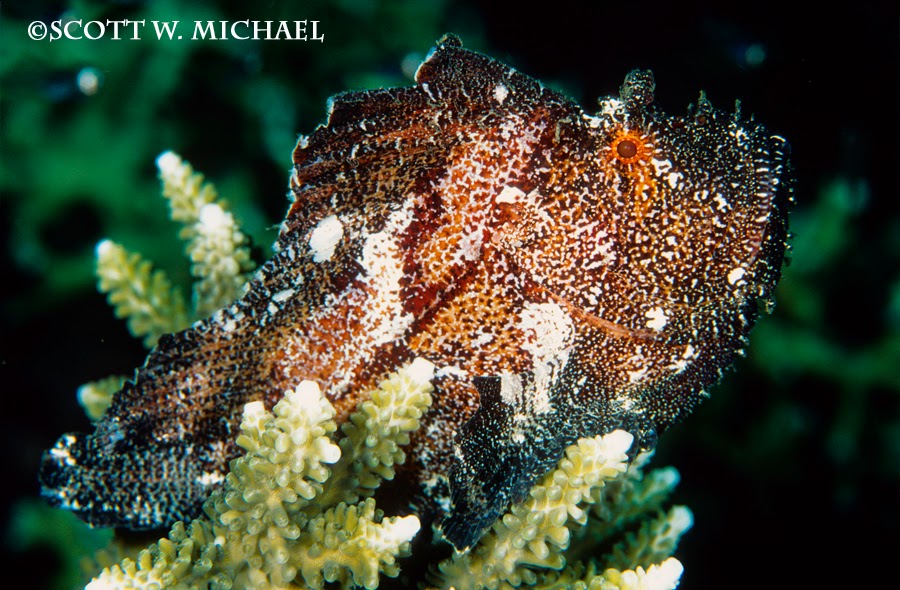 Leaf scorpionfish can be found living among the branches of small-polyped stony corals or on patches of rubble. In either case, they most often associate  with healthy coral reefs.

A Word about Venom

Before we go any further, we need to talk about the venom laden spines of the leaf scorpionfish. All of the scorpaenids have venom glands associated with hollow spines in the dorsal, pelvic and anal spines. The leaf scorpionfish can inflict a very painful sting, but invenomation is rarely if ever fatal. If you decide that you want a T. triacanthus, make sure that you take the necessary precautions when moving it or working in the aquarium with it. The majority of aquarists are stung when they accidentally bump or brush the needle-sharp spines as they clean their scorpionfish’s tank. To prevent this, you must always be vigilant when working in the aquarium. It is a good idea to locate these fish before starting the cleaning process to prevent accidental contact. If you have children, you need to take special precautions to keep young hands out of the venomous fish’s lair.

So what do you do if you are stung by your leaf scorpionfish? To alleviate the pain, you should immediately immerse the wound in hot, non-scalding water for 30 or 40 minutes or until pain has diminished. You can also use a hair dryer to apply heat to the spot where you were stung. The heat will denature the protein that constitutes the venom and prevent it from spreading through your body. The most common symptom of scorpionfish stings is intense pain in the affected extremity and swelling, but nausea, vomiting, delirium, chest and abdominal pain, difficulty breathing, fainting and fever may also occur. It is advisable to seek medical attention immediately after being stung, especially if you feel intoxicated, weak, short of breath, begin to vomit. 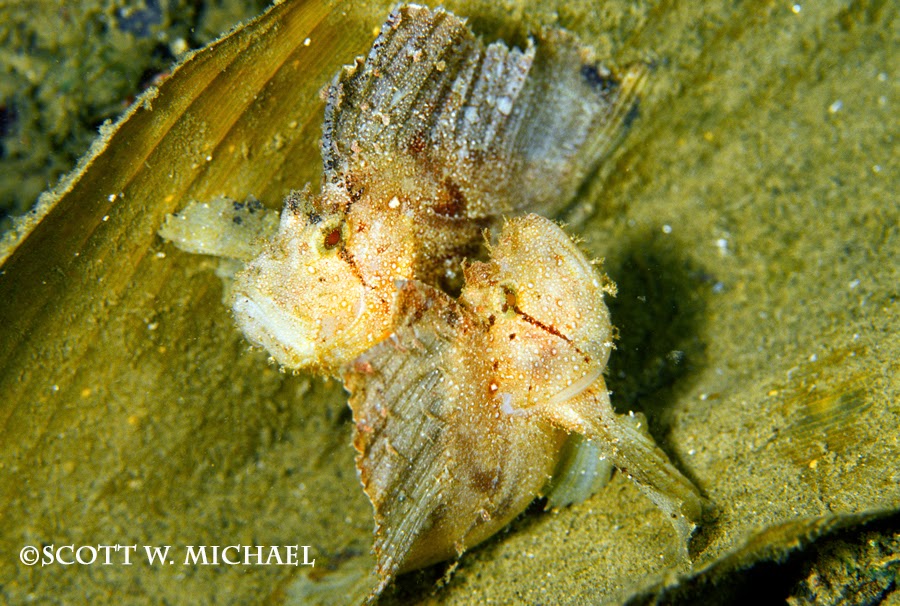 A pair of leaf scorpionfish interacting on a water-logged leaf.

There are a couple of challenges to keeping these aberrant scorpaenids. The first of these is feeding. If you have ready access to live feeder animals, either shrimp of live-bearing fish, than it should not be a problem. Leaf scorpionfish rarely turn down moving prey that is of the right size. I suggest you raise mollies or guppies in seawater. Feed these feeder fish a highly nutritious food, like frozen cyclops, mysid shrimp, or a protein/pigment-rich flake food. You should give the feeder fish/shrimp a good meal a couple of hours before you present them to your T. triacanthus (this is referred to as gut-packing). One thing to consider is that the leaf scorpionfish has a smaller mouth, relative to its body size, than many of their scorpionfish relatives – therefore, you need to select appropriate sized food items.  Hepatic lipidosis, or fatty degeneration of the liver, has been reported in a scorpionfishes. This condition can causes liver failure, which leads to suppression of the immune system, hemorrhaging and anemia. Lipidosis is best avoided by giving your scorpionfish as varied a diet as possible and by not overfeeding. 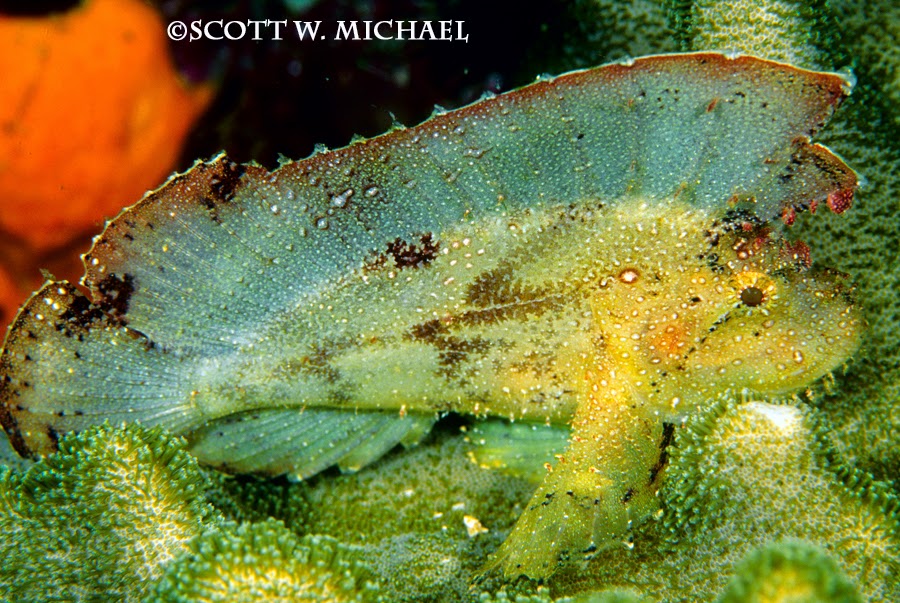 A pink-trimmed leaf scorpionfish in repose on a soft coral off Sulawesi, Indonesia.

The second challenge involves selecting “neighbors.” There are a couple things you need to take into account. First of all, avoid bold, pugnacious feeders that will snap-up the live food you add to the tank before the ambush-inclined leaf scorpionfish gets a chance to get its fill. If you do keep it with food competitors, you may have to corral the hungry leaf scorpion in a portion of the aquarium with a tank divider and feed it on its own. It is also possible to train a leaf scorpionfish to take live feeders from a net.  Place the food item in a net and slowly move it towards the predator. The leaf scorpionfish will gradually learn to jump into the net to capture live food.

The second thing to consider is if a potential tankmate will harm your T. triacanthus. Some territorial species, like larger dottybacks and damsels, may attempt to drive a leaf scorpionfish from their domain. If the aquarium is small enough and it occurs incessantly, the scorpionfish may become stressed and refuse to eat. Some fish species, especially those the nibble on encrusting invertebrates, might also pick at the integument of the leaf scorpionfish. This often happens because the scorpion looks so much like the substrate these fishes normally graze from. As mentioned above, algae can also grow on the leaf scorpionfish’s skin which can elicit nipping by herbivores (e.g., pygmy angels, tangs, rabbitfishes). That is why, it is often easier to keep leaf scorpionfishes on their own, rather than with other fish species. 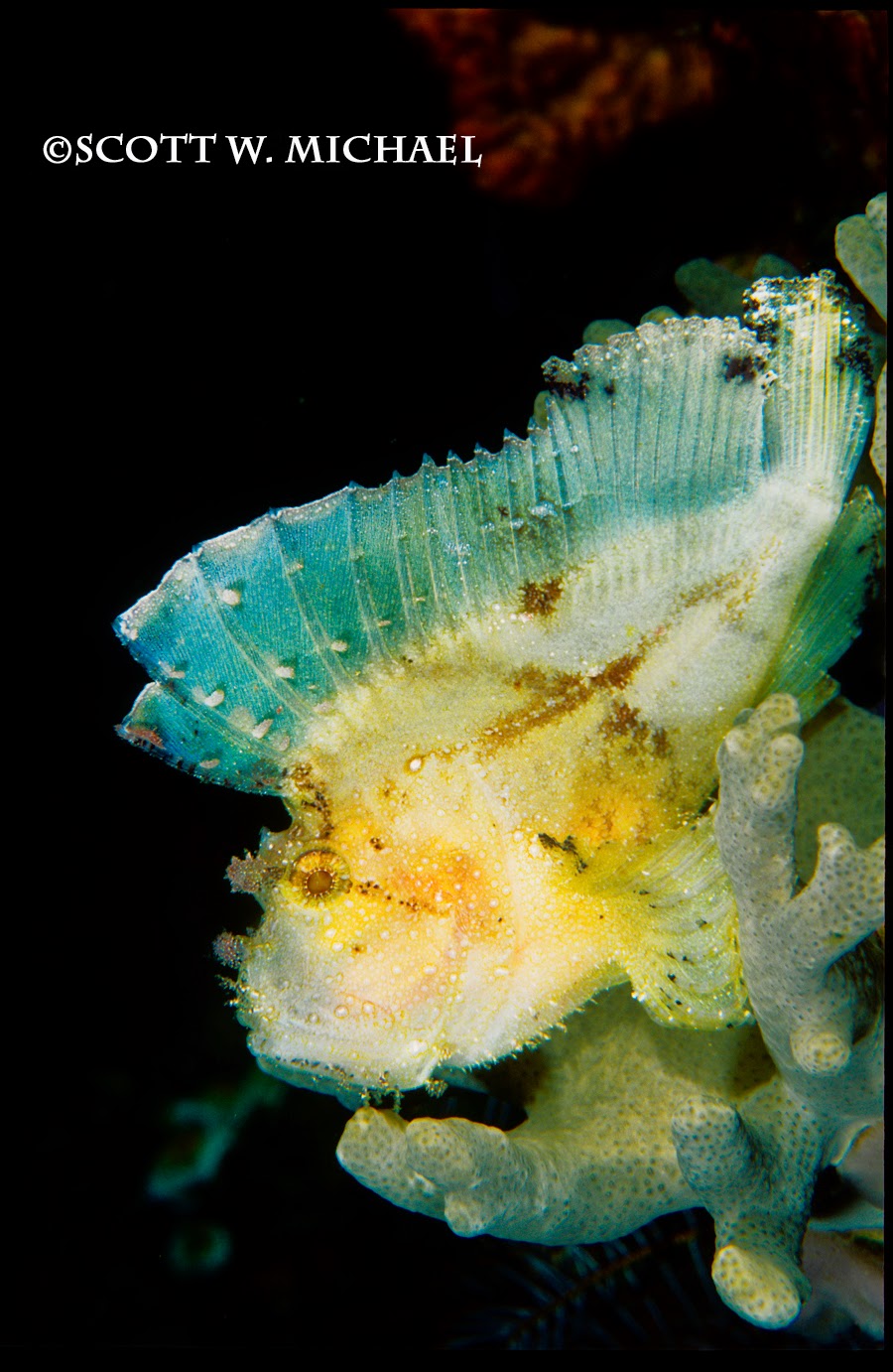 The leaf scorpionfish is one of the most fascinating members of the  family. The color is highly variable - a cream-colored specimen  with  a blue dorsal fin is shown here.

Taenianotus triacanthus is peaceful to other fishes and crustaceans, with the exception of those that it can swallow whole. You can even keep more than one in the same tank, although sexually active males may fight in smaller aquaria. In many case they are collected and sold in “mated” pairs (these are often individuals that were collected together).

While scorpionfish are not for those aquarists looking for an active fish that flits about the aquarium, the leaf scorpionfish is a fascinating piscine aquarium resident that can live for many years and provide the hobbyist with an unusual pet.


© Scott W. Michael - article and photos should not be reproduced without the authors permission
Posted by Reef Tectonics